I found out about PhotoStatistica yesterday and I couldn’t resist buying and try it on my photo library. It took some time before PhotoStatistica the collected the data but once this is done it is quick to check different statistics.

So here is some data from my library 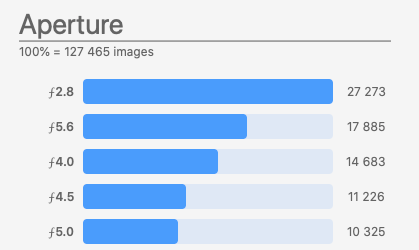 I’m not very surprised by this since I’ve taken most of my photos indoors I’ve used f2.8 a lot. Judging by these numbers it seems reasonable that several of my lenses are f2.8 … I simply have a need for it. 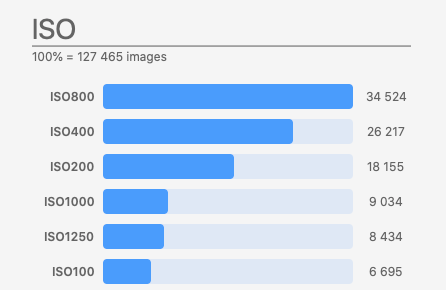 Neither am I surprised by this, for most of my photos I have wanted to freeze motion while taking the photos indoors. This is consistent with this. What I find interesting is that ISO 400 is so high but I think it’s because of my D80, it didn’t really like high ISO so I usually tried to keep it as low as possible. I’m guessing that ISO 800 is mostly from my D700 and ISO 1000 and above from my D4s.

I’ve taken a lot of flash photos … but I didn’t expect it to be the majority of my photos. Interestingly enough most of those, wild guess would be 75000, are taken with one single flash unit: my beloved SB-900. I really like this flash and it has worked flawlessly for, I think, 10 years or so. 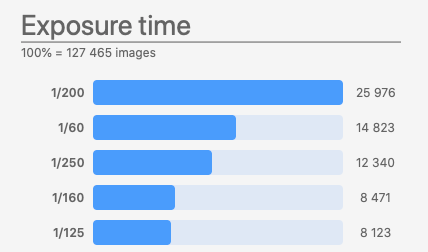 Based on the previous diagram this shouldn’t come as a surprise, 1/200 s is the max flash sync speed on my Nikon cameras. 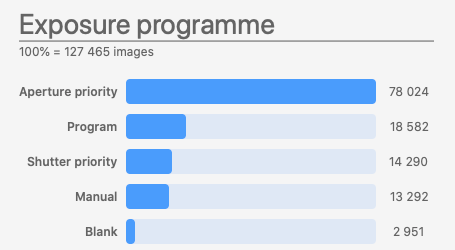 No surprise here either, I almost always use aperture priority. 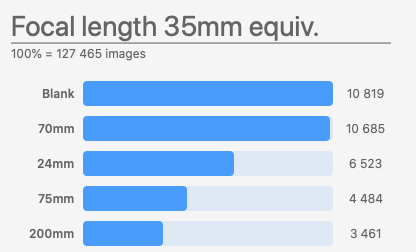 I’ve been using Nikon cameras since 2002 so no surprise here. The up and coming brand is Panasonic, I bought my first Lumix in 2016 and I’m using Lumix cameras more and more. The reason for this is that my D4s is a very good sports camera but a m43 system is much easier to carry when out and about. 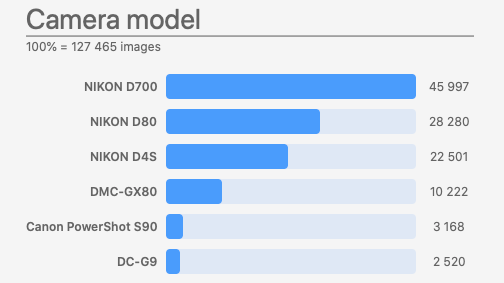 Here there were a few surprises. The D700 was my work horse for about 8 years so those number were expected. But I thought I would have taken more photos with the D4s than the D80. I have been using the GX80 a lot so 10000 photos seem completely reasonable. The biggest surprise here was that the S90 ended up on fifth place. The reason why the G9 is on sixth place is that I’ve only had it for 4 months, I expect it to be closer to the GX80 at the end of the year.

PhotoStatistica can show more info but these are the ones I find most interesting. While most of these numbers were what I expected, there were a few surprises.

2020-06-10 08:59:54 It’s interesting to watch the live press conference where they present who murdered Olof Palme, they are surprisingly thorough. (and yes, I remember