I assume that everybody except me had figured this out by now … but just in case.

I know that some people strongly suggests that you shouldn’t organize your photos by date. I disagree with that and use some kind of hybrid system that basically looks like this: 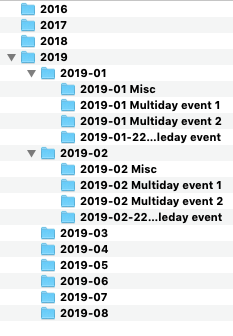 My idea was that this would allow me to neatly organize my photos without the need to figure out som kind of tagging/grouping scheme, simple and fast … and it has actually proven to work just fine. Except for one single thing: the list of years has become so long that it makes it difficult to efficiently using some software (too much scrolling).

I have been sighing over this for several years but I haven’t had the energy to move around the photos to make it better. Don’t get me wrong, dragging around a couple of folders isn’t that much work but it has effects on things like backup etc.

However, I’ve been filling up my disks and I needed to move to a larger storage, so I took the chance of making a small but important change. I now have this organization:

And suddenly I don’t have to scroll as much. Lesson learned, even if it looks silly when you start organizing, for example with only one month of photos, it pays off to think a bit further. I thought I had done that but I didn’t take bad user interfaces into consideration.